UPDATE 4/3/20 – Cleanup is now complete at the Cuyama River in Santa Barbara County, where a tanker truck accident resulted in the release of 4,500 gallons of crude oil on March 21.

Members of the Unified Command leading the response walked through the entire site today and agreed that all cleanup endpoints in the Incident Action Plan have been met.
All of the underflow dams once used to contain the oil have been removed and the shoreline restored.

Equipment decontamination and demobilization will take place next week, along with additional analysis and investigation.

Crews have been following stringent safety protocols in light of the COVID-19 pandemic. No illnesses were reported during the course of the response.

Nine Western pond turtles recovered oiled during the response remain in care at Pacific Wildlife Care in Morro Bay. They will eventually be released where they were recovered. More wildlife information can be found at Owcn.org. 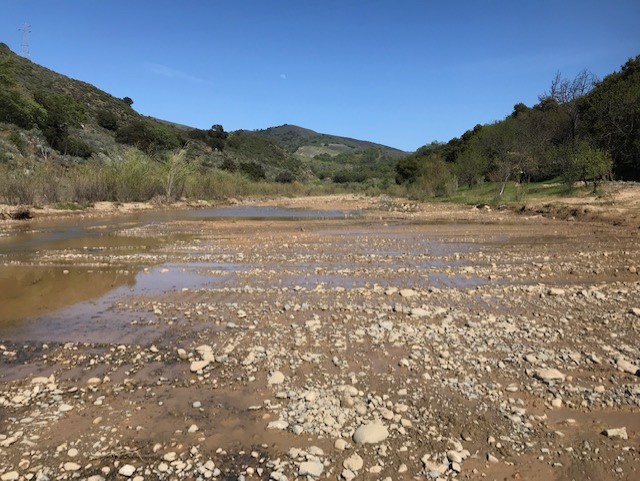 UPDATE 3/31/20 – Cleanup crews remain committed to removing crude oil from the Cuyama River and shoreline in Santa Barbara County. With much of the oil removed from the water, the focus has been on rocks, cobble and vegetation in the area surrounding the March 21 tanker truck accident.

Rock and cobble are being cleaned by hand, and vegetation is cleaned when possible or otherwise removed.

The impacted area has been split up into five divisions as part of the Incident Action Plan developed by the multi-agency Unified Command. The Plan also includes considerations to protect responders from COVID-19. No illnesses have been reported.

Crews are continually monitoring the area downstream of the containment zone and have not observed oil past that point.

To date, oiled wildlife collected include one belted kingfisher (died at care facility), three mallard ducks (two collected dead and one died at care facility), nine Western pond turtles, two California red-legged frogs (a federally-threatened species), one Western toad, 2 Baja CA tree frogs and two additional tree frogs of species yet to be determined. There was also a non-steelhead fish collected dead. All of the turtles and amphibians survived after being cared for by the Oiled Wildlife Care Network (OWCN). The toad and one of the frogs were released a safe distance upstream from the incident. The last two frogs have been washed and will be released tonight.

Based on the cleanup status, the Wildlife Branch has determined that the incident and the response no longer pose an imminent threat to wildlife and the wildlife field operations are demobilizing. The turtles in care of Pacific Wildlife Care in Morro Bay will continue to be cared for in accordance with the OWCN protocols for release back to where captured when ready.

Photos show the containment area of the river, and the Western toad during care and while being released. 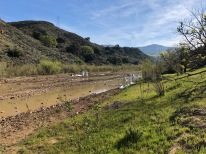 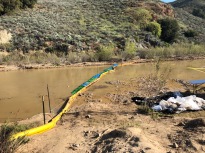 Update 3/26/20: Cleanup crews have removed most pooled surface oil from the containment area two miles downstream of the March 21 tanker truck accident in Santa Maria. The oil/water mix will be quantified in the coming days as it fully separates.
Rocks and soil are also being cleaned at the accident site and along the shoreline.
The Oiled Wildlife Care Network (OWCN) remains on-scene with resources to capture and care for impacted wildlife. Thus far, one dead fish and a dead mallard duck were collected in the field. Two other birds (a second mallard and a belted kingfisher) and two Western pond turtles were recovered alive and taken to Pacific Wildlife Care in Morro Bay for veterinary care. The birds did not survive but the turtles were washed and are recovering. Also recovered alive was a Western toad and a California red-legged frog, a federally-threatened species. Both are receiving care at OWCN’s field stabilization unit. The latest wildlife numbers will be posted at OWCN.org.
As many as 79 people have been involved in this response. A quick containment effort kept the crude oil from reaching Twitchell Dam and Reservoir.

Photographs below show responders at work, drone imagery from 3/25/20, and the Western toad, before and during the cleaning process. 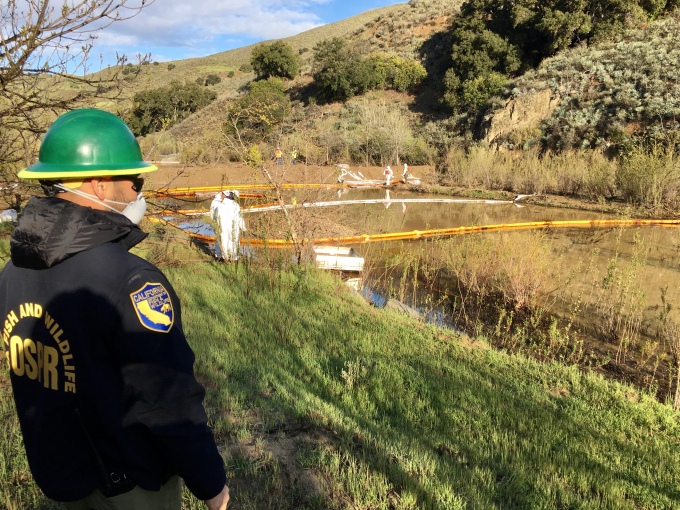 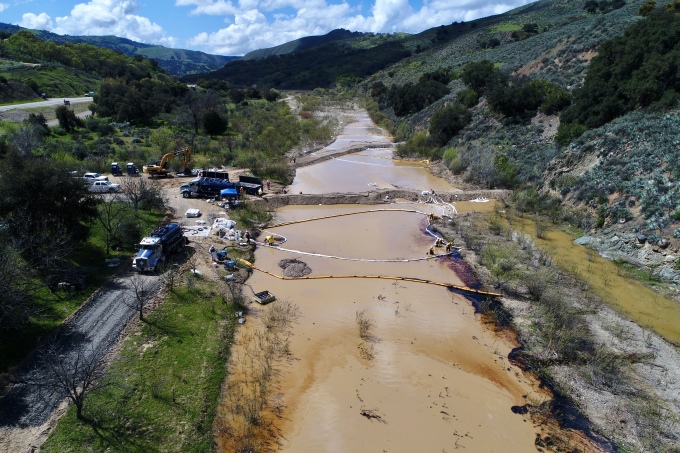 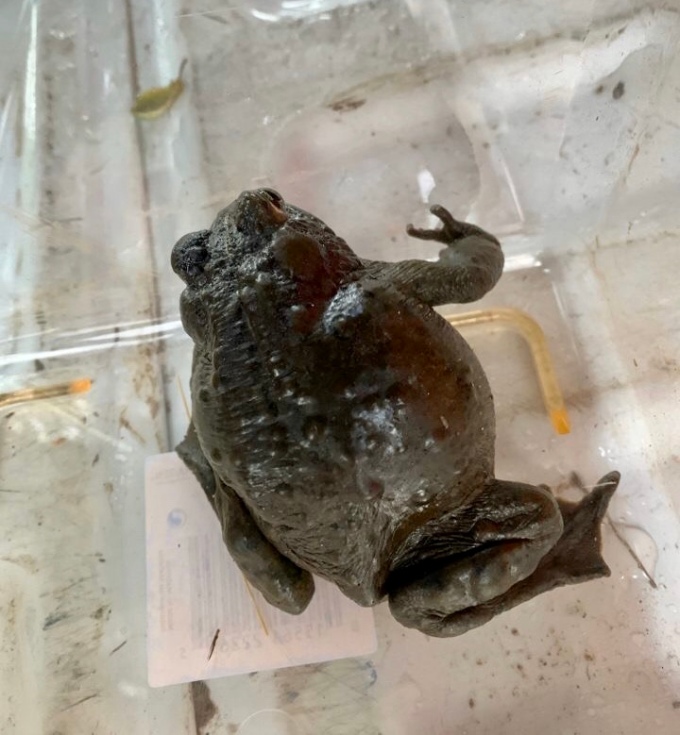 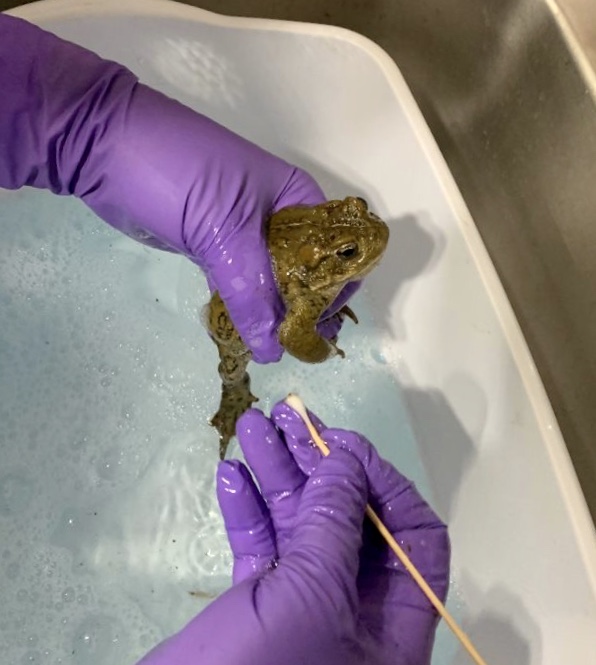 Update 3/24/20: Cleanup continues at the Cuyama River where an overturned tanker truck spilled 4,500 gallons of crude oil on March 21.
Vacuum trucks and skimming devices have worked to remove oil and contaminated water from a containment zone two miles downstream from the accident. The containment continues to hold up well, preventing oil from moving toward Twitchell Dam and Reservoir. Crews have continuously monitored the river through visible observations and drone flights, and have not documented impacts downstream of the containment zone, including at the reservoir.
Oiled Wildlife Care Network crews remain on-scene and have collected two oiled Western pond turtles and three oiled birds: two ducks and a belted kingfisher. One of the ducks and the kingfisher did not survive. The surviving duck and turtles are receiving veterinary care at Pacific Wildlife Care in Morro Bay. More wildlife updates at OWCN.org.
Cleanup is expected to last at least another week. 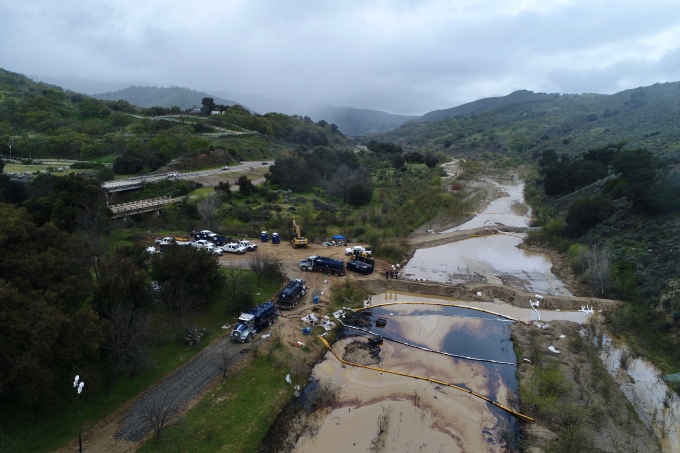 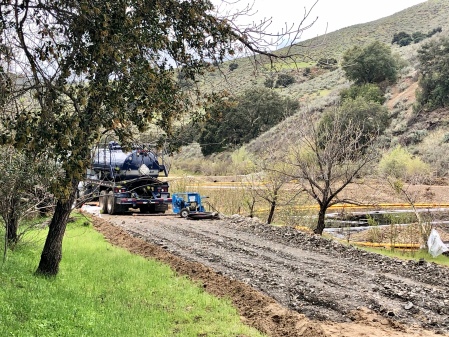 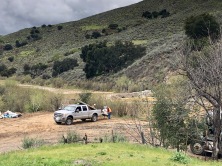 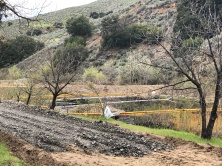 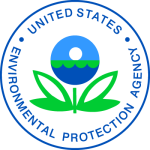 Santa Maria, Calif. – On March 21, a tanker truck collision on Highway 166 resulted in up to 6,000 gallons of crude oil being released into the Cuyama River, a tributary of the Santa Maria River. A Unified Command has been established to oversee cleanup operations.

A rapid response helped contain the oil upstream from Twitchell Dam and Reservoir, and contractors worked all day Saturday and through the night to construct underflow dams and build a gravel access road so that vacuum trucks can remove the crude oil at the dam sites. The trucks are currently working to remove as much oil as possible before tonight’s forecasted rain.

The Oiled Wildlife Care Network (OWCN) has been activated to support the response. Reports of oiled wildlife are being investigated. 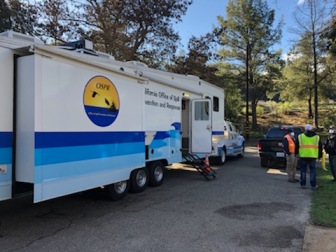 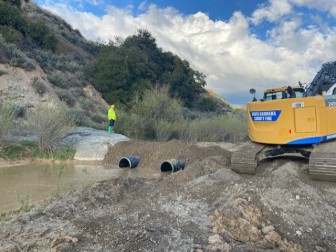 UPDATE 3/22/20: OSPR crew continues to oversee cleanup operations at site of crude oil spill in Santa Maria. Cleanup contractors removed oil from the truck, which was pulled back onto the highway, and they also deployed two underflow dams downstream of on-water containment boom. Operations continued overnight ahead of today’s storm. 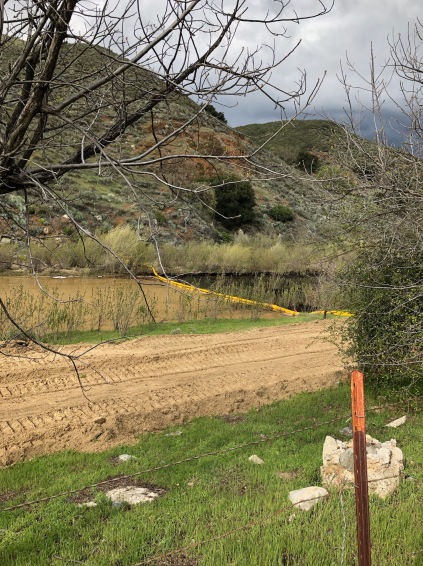 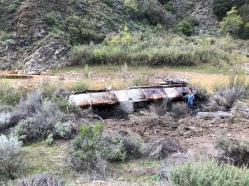 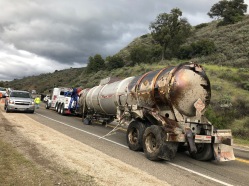 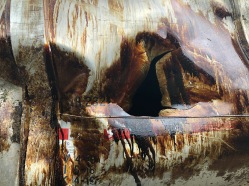 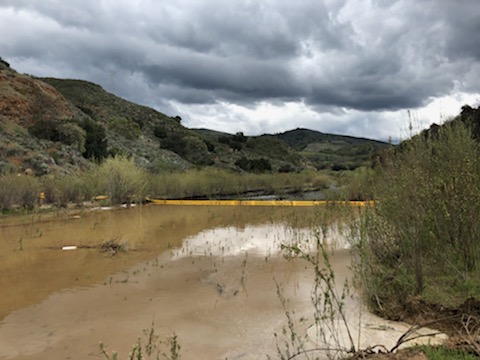 Santa Maria, Calif. – At 7:46 a.m. on Saturday, March 21, the California Department of Fish and Wildlife’s Office of Spill Prevention and Response (OSPR) received a report of an overturned tanker truck that released an unknown amount of crude oil into the Cuyama River, a tributary of the Santa Maria River. The truck was carrying 6,000 gallons of crude oil and the driver was not injured.

The Oiled Wildlife Care Network has also been activated to support the response and potential reports of oiled wildlife.